Why I tattooed Gödel on my arm

Why I tattooed Gödel on my arm June 13, 2016 Jazzpirate
Math / LogicPersonal Stuff
1 Comment 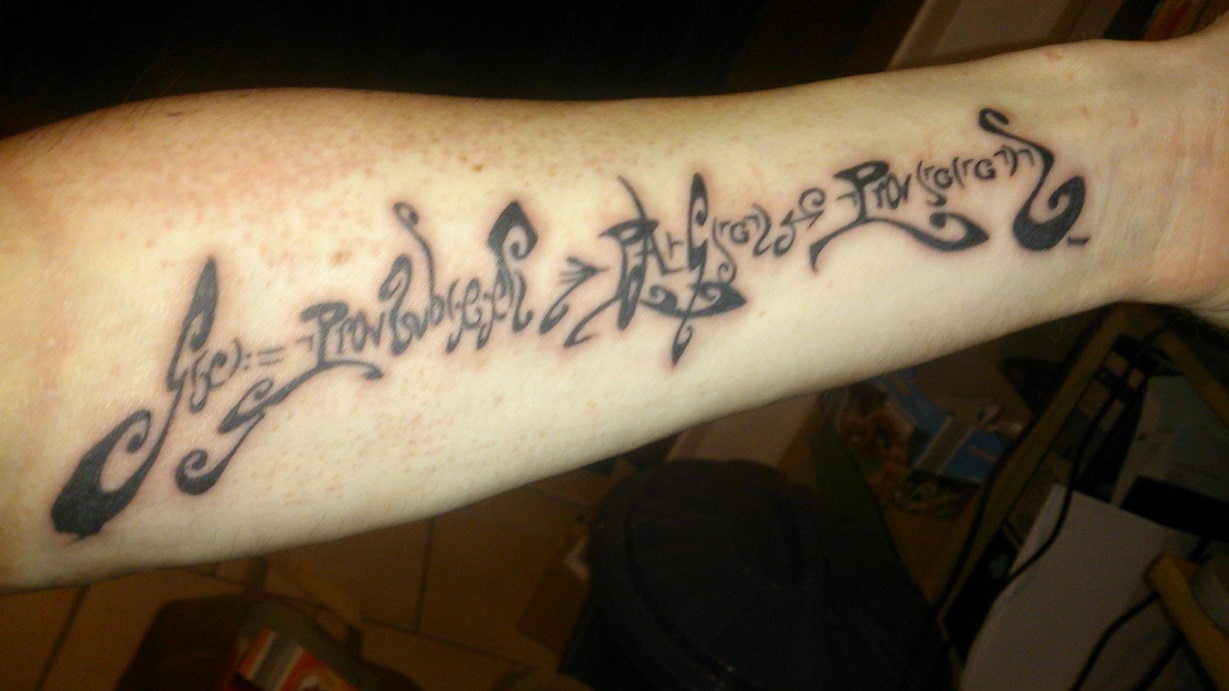 This is what the tattoo on my arm looks like (well – looked like right after I got it. You can still see the skin being noticably red/pale around it). It’s been designed by my flatmate at the time, Gwen. Without the arm it looks like this:

Probably still not too legible, so let’s get rid of the decoration (sorry, Gwen) and we get this here:

This statement represents the central idea behind the proof of Gödel’s incompleteness theorems – which to me represent the pinnacle of mathematical ingenuity, elegance and beauty. So let me try to explain why.

Yes, I’ve already written about the incompleteness theorems in previous iterations of this blog, but a) they don’t exist anymore, b) I can’t let my tattoo unexplained on a math blog and 3) Gödel is awesome 😉

Disclaimer: I’m trying to explain a quite technical mathematical theorem without misrepresenting it, but also without all the gritty technical details. The latter means I’ll skip over and simplify a lot of details that are important if you want to fully understand the theorem, its proof and especially its implications. So be careful not to draw conclusions from this post alone and keep in mind, that this is just a simplification.

For all practical purposes, the language of mathematics is first-order predicate logic. It’s an extremely simple, yet highly extensible language with just a handful of fixed symbols:

…plus parentheses and, depending on the specific context, a finite number of variables and symbols representing constants, functions or relations. The grammar of first-order logic is recursive and fully defined by just a handful of rules – it’s hard to come up with a (useful) language that is even simpler. Which is why it should probably be somewhat surprising, that according to general experience and mathematical folklore, every mathematical statement can be expressed in this language, i.e. can be reduced to just a handful of symbols put together according to just a handful of simple rules.

Now, this also allows for defining what a proof is; namely a sequence of formulas, such that every formula in the sequence “is derivable / provable from” the previous ones. And as it turns out, this “is provable from” can further be reduced to just a handful of rather simple proof rules, such as:

There are lots of different proof calculi (i.e. sets of proof rules), but for our purposes all we need to care about is, that a calculus exists that is complete. And that is what Gödel showed in his Ph.D. thesis in 1929: There is a proof calculus for first-order logic such that every statement, that logically follows from a set of premises (axioms), can be proven in that calculus.

In a certain sense that means that all of mathematics can be reduced to putting a couple of symbols together to form sentences, according to very simple rules, and applying a couple of very simple proof rules to them to form new theorems. All of math, once reduced to first-order logic, is just simple, purely syntactical manipulation of symbols. I don’t need to know what the symbols mean, or why the proof rules are valid – I just need to apply them, like moves in a game.

Now for the incompleteness theorems: They concern the search for a set of axioms, that is

There already was a contestant for that set of axioms – as it turned out, set theory is incredibly powerful in that regard, and a theory of sets was (and still is, though now with certain restrictions) indeed a plausible candidate for a basis of “all of mathematics”. Just the points 2. and 3. still needed to be proven. And that’s what Gödel tried next. Instead, in 1931 he proved that that was impossible.

However, Gödel realized that the natural numbers are already complex enough to be able to encode formulas themselves! Nowadays that shouldn’t be too surprising – computers encode everything as numbers after all, but it turned out, that that fact kills all hope for a complete foundational axiom system.

Here’s one way to do that: To start off, we assign every symbol in our language to a unique number – e.g. we can just enumerate them:

That still leaves us with plenty of room for additional symbols, and for variables we just use the numbers >100.

Now a formula is just a sequence of symbols, and every symbol has a unique number, so we can e.g. use the uniqueness of prime factorizations to encode formulas just as uniquely:

And if we decompose that number back into its prime factors, we will get our original sequence of numbers back, and thus our original sequence of symbols, i.e. our formula. So for each formula \(\varphi\), we get a unique number \(\ulcorner\varphi\urcorner\) that encodes that formula – called its Gödel number. And it’s easy to determine, whether any number is a Gödel number – we just need to look at its prime factorization and check whether they observe the rather simple (and on the basis of numbers easily computable) grammar of first-order logic. Which means, by talking about Gödel numbers, Peano arithmetic can talk about formulas.

Next, remember that proofs are also just sequences of formulas (or their Gödel numbers) obeying certain rather simple rules, so by the same encoding we can assign numbers to proofs – just take the powers of primes of the Gödel numbers of the formulas in the proof. The consequence of that is, that the claim “the formula \(\varphi\) is provable” is equivalent to the statement “there is a number \(p\) that encodes a proof for the number \(\ulcorner\varphi\urcorner\)”, which is just a relation on numbers. In fact, the relation “\(p\) encodes a proof for \(\varphi\)” is – since the proof calculus is rather simple and easy to verify – computable and ultimately reducible to “simple” arithmetic on natural numbers, which means Peano arithmetic can talk about the provability of formulas.

Let me repeat that: In talking just about numbers and simple arithmetic, we can also talk about formulas and whether they are provable!

So let’s do that now:

We first add a new symbol \(\text{Prov}(x)\) to our list, just as an abbreviation for the (otherwise rather complicated) formula for the property, that \(x\) is a Gödel number that corresponds to a provable formula, i.e. \(\text{Prov}(\ulcorner\varphi\urcorner)\) is true, if the formula \(\varphi\) is provable in Peano arithmetic.

We’re now ready to look at my tattoo again:

then \(G(\ulcorner P\urcorner)\) states, that it is not provable (in Peano arithmetic), that the Gödel number of \(P\) is itself a prime number.

…now it just so happens, that \(G\) is itself a property of numbers – in particular of Gödel numbers. So what happens, if we apply \(G\) to its own Gödel number? Well, this:

We managed to build a formula that not just talks about other formulas (via their Gödel numbers) – we found a formula that talks about itself. And even crazier: the formula asserts its own non-provability, just like the sentence “I am not provable”, except that in actuality it’s just a mathematical statement about numbers and their properties. Which means: The formula is true if and only if it is not provable, which can be expressed as a formula:

“Sufficiently powerful” in this context means, it must allow for everything we did with the natural numbers here; primarily we need infinitely many objects (e.g. numbers), and a way to encode finite sequences of objects as objects themselves (e.g. using prime number decomposition). Since we definitely need at least the natural numbers in a proper foundation, we’re screwed.

Now that we know, what my tattoo means – why did I have that tattooed in the first place? Well, to me, this is mathematics at its absolute best. At its center, there is a simple idea (basically: use the liar paradox to make the system implode), expressed in a new way (using first-order logic to construct a formula that negates its own provability) using a clever new technique (encoding formulas as numbers) and an incredible amount of hard work (here is Gödel’s original paper, if you want to look at it), yielding a surprising result (seriously: the whole mathematical community at the time was hoping for the opposite!) with (in this case even) profound philosophical implications about what it even means to be true, false or provable in mathematics in the first place.

It’s a piece of art constructed out of pure reasoning!

In a sense, the incompleteness theorems are to logic (and logic is to math), as Heisenberg’s uncertainty principle is to quantum mechanics (and qm is to physics). That analogy is probably not even that contrived – at the very least the timing is about right 😀

So to me, this one formal string on my arm represents everything I love about mathematics.

1 Response to Why I tattooed Gödel on my arm