This post is primarily directed at students in the AI class at University Erlangen to explain the Davis-Putnam (Logemann-Loveland) Algorithm for SAT solving and implication graphs for clause learning.

, or a proof that none exist, i.e. that the set is unsatisfiable. DPLL is closely related to the resolution calculus, and as with resolution we first transform

to a set of clauses

is a set of literals

is the propositional variable

if it is the negation of

corresponds to the formula

and a partial assignment

if none exist. It proceeds as follows:

Now why does this work? Let’s start with unit propagation: If

, then the formula corresponding to our clause set looks like this:

and obviously, for this formula to be satisfied, we need to set

. Conversely, if we have the unit literal

and we obviously need to set

. Now for simplification: If we assign

, then any clause that contains the literal

will be satisfied by

, since clauses are interpreted as the disjunction of its literals. Consequently, we can ignore these clauses from now on. The remaining clauses however will still need to be satisfied, and if we have

, then we know that the literal

will be false anyway, which means we can ignore it in any disjunction (i.e. clause) containing it.

Apart from unit propagation and simplification, all that

does is guessing assignments and backtracking if it fails. As such, it can very easily happen that the algorithm tries the same failing partial assignment again and again; e.g. because somewhere along the way it splits on a propositional variable that has nothing to do with why it failed before. A nice example of how this can happen is, if we have basically independent clauses that don’t share any propositional variables in the first place:

Example: We take the clause set from before and pointlessly extend it by the independent clauses

. Obviously, these are basically two independent SAT problems that don’t share any propositional variables. But as we’ve seen before, if we start with

our original clause set will necessarily fail, but the algorithm will only notice once

) have been assigned as well. If our

run will start with

, but (in the worst case) then continue with

first, it will try the same assignments for 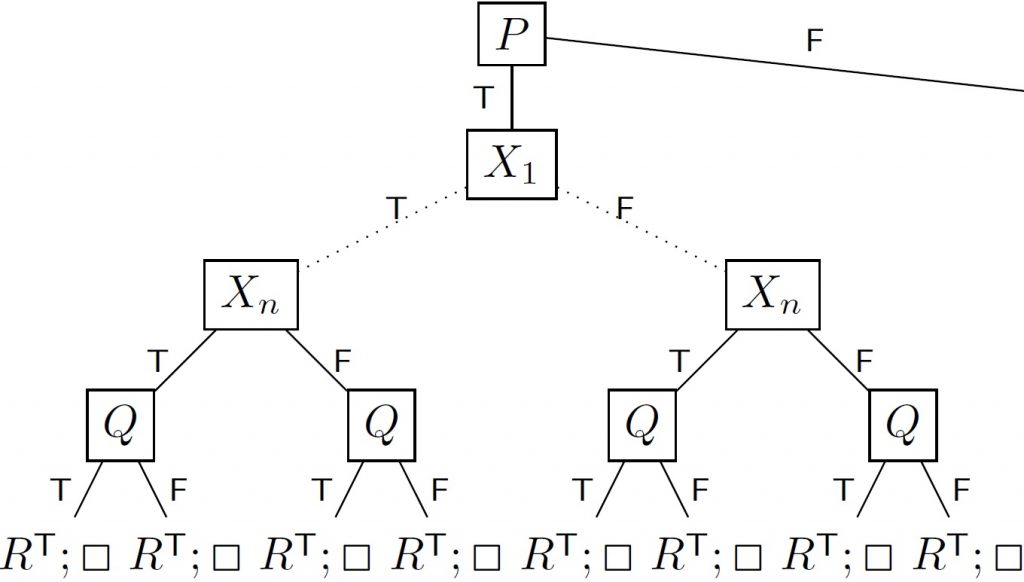 This is where clause learning comes into play: If we fail, we want to figure out why we failed and make sure we don’t make the same mistake all over again. One way to do this is with implication graphs, that systematically capture which chosen assignments lead to a contradiction (or imply which other assignments via unit propagation). An implication graph is a directed graph whose nodes are literals and the symbols

becoming empty, i.e. a failed attempt). We construct such a graph during runtime of

Before we answer the question why we’re doing this, let’s go back to our previous example and construct the implication graph to the first contradiction. To keep track of which clause a literal is coming from, let’s name them: 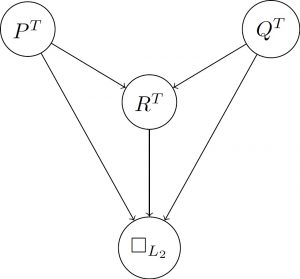 So, how does that help? Well, the graph tells us pretty straight, which decisions lead to the contradiction, namely

. But more than that, it tells us that

wasn’t actually a decision; it was implied by the other two choices. So in our next attempt, we need to make sure we don’t set

. The easiest way to do that is to add a new clause for

. Hooray, we learned a new clause! Before we examine how exactly we construct clauses out of graphs, let’s continue our example with this newly added clause: 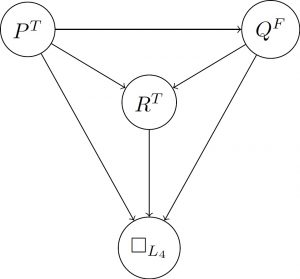 This time, we can immediately see that the bad choice was

. We can learn from this, by adding the new clause

, which of course is a unit and thus immediately becomes part of our assignment.

So, how exactly do we get from implication graphs to clauses? That’s simple: starting from the contradiction we arrived at, we take every ancestor of the

-node with no incoming edges – i.e. the roots. Those are the literals that were chosen during a split-step in the algorithm, and the other ancestors are all implied (via unit propagation) necessarily by those choices. These choices (i.e. their conjunction) lead to the problem, so we take their negation and add them as a new clause: In the first example graph, the roots were the node

, so we added the new clause

. In the second graph, the only root was

, so we added the clause

Admittedly, in this example adding the learned clauses didn’t actually help much – but imagine bringing the variables

back into the mix. Where we had hundreds of almost identical branches before, with clause learning the search tree of the algorithm will look more like this: 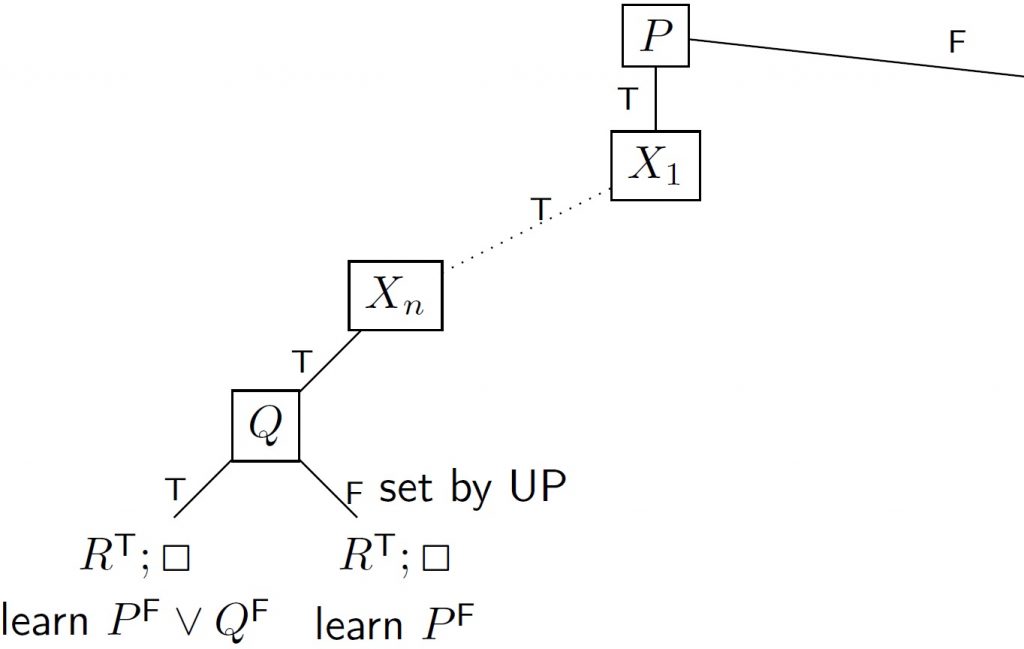 Two failures are now enough to conclude, that setting

was already a mistake and we can immediately backtrack to the beginning.