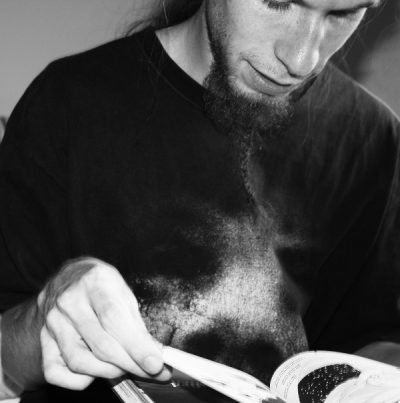 So, given that my CV is a bit more… non-linear than most people’s, I figured that might be worth a post on its own:

I graduated (the german equivalent of) high school in Garmisch-Partenkirchen 2006, majoring in Math and English, at which point my plan was to study jazz guitar and make a living as a musician. One thing that people tend to find funny is that I finished Math with just two points out of 15 – in fact, I remember quite proudly proclaiming before then, that I would graduate with one point in Math (my teacher joked back then, that he only gave me the second point out of spite). That’s because I did the math and realized that one point would be enough to graduate, and given that I wanted to be a musician my grades didn’t matter at all. Also, I was lazy.

However, I picked Math as a major for a reason – namely, because it’s interesting. Also, obviously real math has little to do with what’s being taught in school, which mostly focuses on applying math (as it is done in the sciences) instead of what mathematicians actually do, i.e. discovering and coming up with new concepts and proving theorems about them.

So after graduating I spent two years at Jazz & Rock Schule Freiburg (now International Music College Freiburg), before I moved to Munich to prepare for an application at the conservatory of music (the professor for jazz guitar in Munich is Peter O’Mara, an incredibly nice guy, great teacher and genius musician who taught Jan Zehrfeld, the guy behind one of my favorite bands Panzerballett).

Two years (and one failed application) later, I had slowly realized that

So I went back to Freiburg (because I love that place) and enrolled in Physics at university. In Freiburg, Physics students have all the required classes that mathematicians do, and I quickly noticed that I had a lot more fun in the math classes – physics, in the beginning, is mostly memorizing, lots of computation and applying equations, whereas in math you start right with the fun parts: defining and proving things. And you start basically from scratch. Moreover, two friends (and at various points flatmates) of mine convinced me (rather easily, I might add) to take a class on mathematical logic, and that had me completely hooked (thanks, Joule and Vautzner! 😉 ).

At the end of my masters, I met Michael Kohlhase at a workshop on computer tools in pure math at our university, where he gave a talk about basically all the work they do at KWARC. Michael is an incredibly good speaker, as anyone who has seen one of his talks can attest to, so it’s not surprising that I was immediately hooked again. I asked him about open Ph.D. positions (since I was already looking for one), applied, got accepted, moved to Bremen and here I am.