Home / Music / Personal Stuff / How to piss of the guitar-guy at the music shop (Also: how guitars work)

How to piss of the guitar-guy at the music shop (Also: how guitars work)

How to piss of the guitar-guy at the music shop (Also: how guitars work) June 10, 2016 Jazzpirate
MusicPersonal Stuff
0 Comment

I recently brought my baby to the hospital. And by baby, I mean favorite guitar. And by hospital, I mean music shop. The reason being that I wanted to tune down quite a lot and it needed to be readjusted. The guitar in question is an Ibanez Universe 7-String guitar, which I wanted to be tuned down by a whole step, with the lowest B string dropped by an additional whole step down to (in total) G. And I managed to massively annoy the guy at the shop who had to do that 😉

To explain why, I’ll have to explain a bit about how guitars in general and floating bridges in particular work, so it’s as good an excuse as any to go into that:

The pitch of a note produced by a guitar string depends on three things:

The first one is pretty much fixed, except when actually playing – i.e. pressing down the strings with your fingers to cut them off, effectively making them shorter. The second of course just depends on which kinds of strings you have. The third is what you use to tune the guitar – you turn the tuning knobs and increase or decrease the tension, thus tuning it up or down.

Now, Newton’s 3rd law tells us, that if we in- or decrease the tension, i.e. in- or decrease the force acting on the strings, the strings will exert an equal and opposite force on the neck of the guitar – i.e. the neck of the guitar is more or less strongly pulled towards the front of the guitar. Which means: If you tune one string down, you reduce the force pulling the neck, the neck will bend backwards slightly, which will increase the tension of all other strings, thus tuning them higher – which means they’ll need to be tuned down again, reducing the force and tuning all other strings higher again, etc.pp., until the whole process finally converges to an equilibrium of forces with all strings sufficiently in tune.

Of course, in practice that effect is tiny and doesn’t matter much. But if you tune your guitar down, or switch strings to thinner or thicker ones (which exert more or less force on the neck), or – to compensate the former with the latter – both, this (among other factors) will cause the fine-tuning to be slightly off. What this means is, that we need to make sure, that e.g. the twelfth fret on the neck is exactly at the center of the string (the octave of a note corresponds to dividing the length of the string by 2) for the guitar to be well-tempered. And if the length of the string changes, or its height above the fretboard (e.g. due to noticeable changes in the tension on the neck), you need to fine-tune the guitar. For that, the bridge (which is the part of the guitar that holds the ends of the strings) usually has screws, which allow you to slightly lengthen or shorten (the freely vibrating part of) the string.

As I said, usually those effects are rather small – buuut I have a floating bridge. Which means, my bridge isn’t screwed or glued to the body of the guitar, but is held in place by a couple of springs in the back of the guitar, counteracting exactly the tension of the strings. The point of that is, that you can attach a small lever to it (see image above) with which you can pull the bridge (and thus all the strings) quite a lot further back into the body (and thus tuning everything quite a lot up) or pressing the lever down, pulling the bridge out of of the body and releasing a lot of tension on the strings and tuning them massively down. 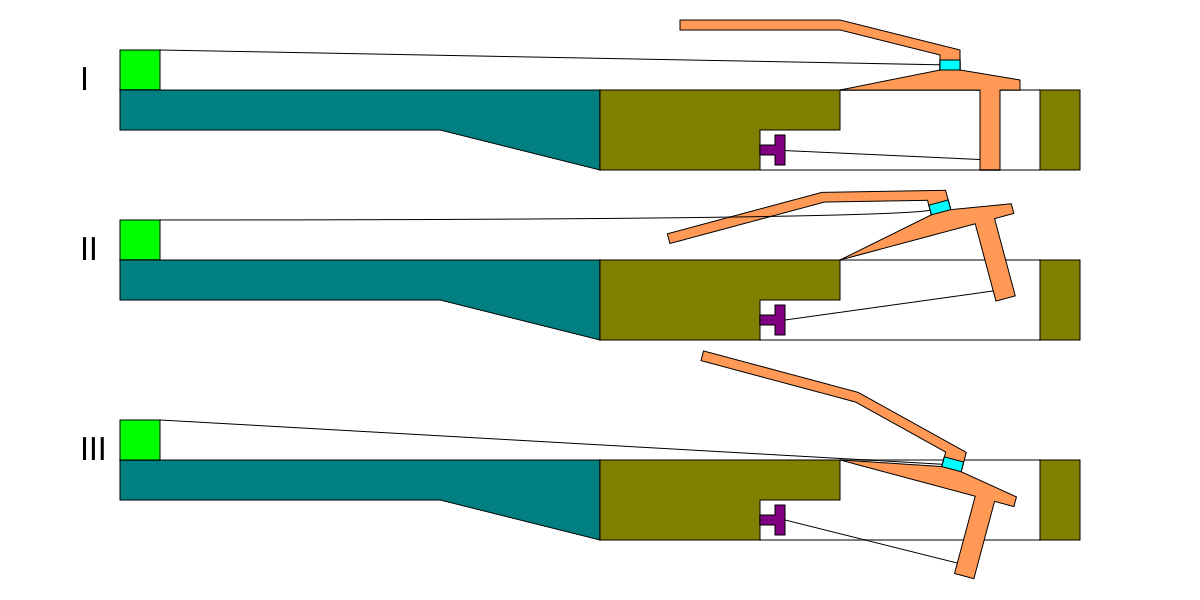 You can do a lot of cool and weird stuff with that:

Now the problem is, that since the exact position of the bridge is determined by the point of equilibrium between (and thus the elastic coefficients of) the strings and the springs, which obviously deform a lot easier than the neck of a guitar, the effects I described earlier are exaggerated by orders of magnitude! Just tuning the damn thing is a real bitch, since every time you tune one string, all the other strings will noticeably change pitch as well! Now if you switch strings and/or detune your guitar, you have to:

…aaand we have a nice clusterfuck of things that need to be adapted, each of which reacts to each change in any of the others.

But wait – there’s more. There are guitars that are well-suited to being tuned down – there are even bariton guitars which are tuned down by a perfect fifth by default (i.e. they’re basically 7-string guitars with the highest string missing). My guitar certainly isn’t one of them. If you get one of those, what you’ll get is a metal guitar, perfectly suited for heavy, distorted riffing but little else. That’s not what I want though – I value flexibility and versatility in a guitar. That’s why I got a 7-string guitar with a humbucker/single-coil/humbucker pickup arrangement and floating bridge – I want to be able to do as much as possible with that thing. But it’s not intended to be detuned too much.

Tuning that thing down implies you need to use thicker strings, and there’s a limit to how thick they can be – namely, they have to fit into the corresponding holes in the guitar. And those are intended for guitar strings, not construction-site-grade steel cables 😉

Apparently, the guitar guy fiddled for hours to get my intended tuning to work with the thickest strings that still fit in there (I now have a bass string on my guitar 😀 ) and properly adjusting the fine-tuning, the bridge etc. must have been a proper pain in the ass. I can only imagine how annoying that must have been, but it still cost me only 50€, which is nice.

I’ve been working on a new song using my new tuning for a while now – I still can’t properly play it yet (when I write music, I tend to underestimate how much practice it will take me to get it down), but once I’m done, you’ll be able to hear my new tuning in action 🙂